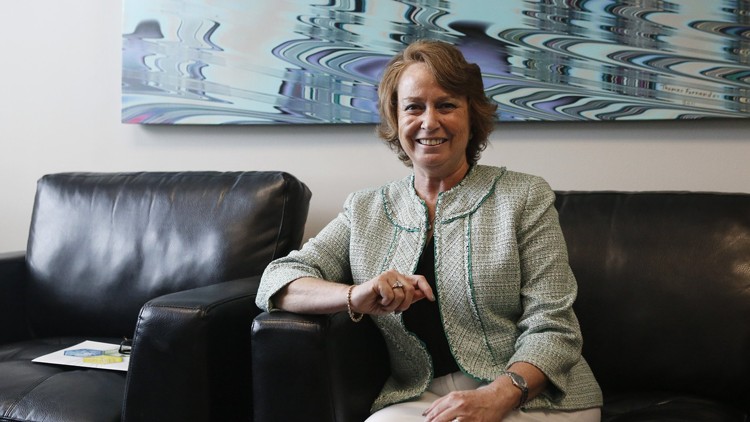 Jane Teague sees her job as helping the state’s innovators and inventors make it across the “Valley of Death.”

She is talking about ideas cooked up in Florida universities — such as early tests and treatments for diseases like cancer and Zika, software that aims to keep food fresher on trucks or drones to survey storm damage better.

The valley of death is the stage when “so many start-ups fail, that phase in between public grants and maxing out one’s credit cards, and when a company can actually qualify for outside investment or bank financing,” said Teague, chief operating officer for the Florida Institute for the Commercialization of Public Research in Boca Raton.

The institute was created by Florida’s legislature in 2007 and funded by the state with the goal of helping promising ideas find their way from university labs to commercial success.

Taxpayer support to help private businesses has come under fire in Tallahassee for efforts such as tourism and attracting new companies, but institute officials say they do not provide corporate incentives. Rather, they provide funding to be matched by private investors, and a study last fall by the Washington Economic Group concluded companies funded by the institute have helped create more than 4,000 jobs with an economic impact of more than $600 million since 2011.

That represented a return on state investment of more than 22 times, the study said. It made the case that, for example, companies have raised in excess of $119 million in private funding, “inducing capital into Florida that may otherwise have been invested outside the state.”

Along the way, the Massachusetts native has brought to bear her experience in the private sector, including a stint with software firm McCormack & Dodge.

As she sees it, “the need for seed funding for innovation-based startups is more critical than ever before.”

Where you live now: Delray Beach

About your organization: The Institute helps startup companies that are launching innovative products developed through university research. Think Gatorade, originally created at the University of Florida to ensure that the football team stayed hydrated while on the field, and now one of the leading consumer brands of all time. Florida universities and research institutes conduct over $2.5 billion in research and development annually, and the Institute provides support services and seed funding to ensure that new products and companies based on that R&D succeed. Some examples of products being developed include medical devices and test kits that improve early detection and treatment of diseases such as cancer, macular degeneration, mental illness, paralysis and the Zika virus; drones that efficiently survey large geographic areas affected by storm damage; advanced materials that protect athletes from injury; software that monitors trucking temperatures to ensure that food is delivered safely (and even tells you when temperatures dip too low or rise too high!), and marketing automation and e-commerce solutions that help businesses operate more profitably.

The support and funding offered by the Institute fill critical gaps faced by young companies, helping them to cross what is known as the “Valley of Death” where so many startups fail, that phase in between public grants and maxing out one’s credit cards, and when a company can actually qualify for outside investment or bank financing. Institute-funded companies have leveraged state dollars to raise five or 10 times or more in additional private funding, augmenting the state’s investment in higher education, innovation and entrepreneurship. Companies are providing graduates with high skill, high wage career opportunities, attracting top entrepreneurial talent and investment capital to Florida, and supporting the creation of service-related jobs in related industries which provides new opportunities for all Floridians.

Since 2011, Institute-funded companies have supported the creation of over 4,000 direct and indirect jobs, delivering an overall economic impact in Florida of $630 million (through June 30, 2016).

How your business has changed: Our business is dependent on two major factors: what new products are being developed, and, where are early stage investors deploying their capital. For example, information technology and healthcare continue to converge to allow for things like easier appointment scheduling, better patient tracking and record keeping, and more precise disease detection, diagnosis and treatment. Another hot area is the “Internet of Things” — the interconnectivity of devices such as thermostats, vehicles and appliances that collect and share data and enable you to do things like monitor your security system or turn on your thermostat remotely. Robotics and machine learning are other areas that are exploding right now, supporting great advancements in healthcare and education, and there are many more. It should come as no surprise that Florida universities and research institutions are conducting groundbreaking work in all of these areas, and our job is to help find experienced management talent, capital and other resources that they need to help them grow.

In addition to changes in technology, changes in investor behavior such as industry preferences, confidence in the economy overall, and risk tolerance also have an impact. Recently, the trend has been for early investors to invest later in a company’s development, often after a company has completed and tested its product and is actually generating sales. This has widened the gap even further between early R&D and the stage at which a company may qualify for later financing.

Given Florida’s sheer size, combined with the increase in the volume and quality of research being conducted, the need for seed funding for innovation-based startups is more critical than ever before.

To help navigate these changes, the Institute is supported by a 32-member Investor Advisory Board, members from the angel and venture capital investment communities throughout the U.S. who review company presentations and provide feedback. They are at the forefront of technology advancements and investment cycles, and through their participation and expertise, the Institute is able to follow best practices, remain current and adjust its programming as needed.

First paying job and what you learned from it: My first paying job was at a pet shop, taking care of new puppies after school. I thought it would be all about feeding them, petting them and generally keeping them company, and didn’t anticipate having to clean their cages. Covered in poop and ready to literally throw in the towel after the first few days, I spoke to my parents who discouraged me from calling it quits. What I learned was to persevere, focus on the positive and keep your eyes on the big picture. In other words, although sometimes things will get messy, the journey and achievement of the ultimate goal is what’s important.

First break in the business: My first real break was being hired at McCormack & Dodge, a leading enterprise software company in the 1980s. At the time, most major corporations globally were using McCormack & Dodge’s software to run their operations, and I was hired to help market and launch new products. Being in the software industry back then was a lot of fun, as we got to witness new technology advancements every day. This was actually when what we now know as cloud-based computing was born, with the industry was moving from centralized computing (all functions taking place on a giant computer literally the size of a room), to distributed, networked computing, with different functions taking place on desktop PCs (clients) connected to other computers doing other functions (servers). One day we had to present this change at a company-wide meeting, and rather than doing a presentation my boss called out various employees of all shapes and sizes to come up on stage and act it out, all while MC Hammer’s “Can’t Touch This” blasted in the background. It was a great example of how to translate a new, complex concept into a visual image that anyone could identify with and no one would forget. I also got to travel to Latin America and Europe to train our partners, which was quite an opportunity for a twenty-something year old just starting out.

Best business book you ever read: Although a bit dated, I enjoyed Iacocca: An Autobiography about famed auto executive Lee Iacocca. I enjoyed reading about his early life, and how he rose in the company to orchestrate the unprecedented launch of the Ford Mustang, mid-year and at the 1964 World’s Fair, which demonstrated his great business instincts and the importance of risk-taking. I also was interested in his very public departure from Ford and subsequent successful turnaround of Chrysler. More recently, I enjoyed Start with Why by Simon Sinek, a great read on inspiring others to do great things.

Best piece of business advice you ever received: “Success consists of going from failure to failure without losing your enthusiasm” — Sir Winston Churchill

What you tell young people about your business: Nothing is impossible, we are creating the future and together with our university and community partners are truly making the world a better place.

What do you see ahead for Palm Beach County? Palm Beach County has tremendous assets and I see its potential to become a global leader in scientific research in areas where we have core strengths that could include neuroscience, diseases of the aging, and healthcare information, to name a few. The capabilities of our research institutions, combined with top quality hospitals, physicians, specialty care centers, private industry and a large and diverse patient population are many of the assets we have to make it so.

Where we can find you when you are not at the office: Walking our dog, or, depending on the time of year, watching professional football or baseball. You may also find me at the movies still enjoying the big screen and over-priced popcorn.

What is the most important trait you look for when hiring? Integrity, a strong worth ethic, and a large dose of common sense.